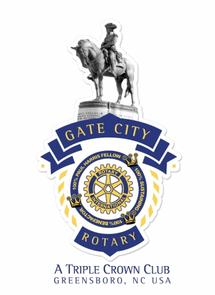 In May 1991, the Gate City Rotary Club was formed when 36 men and women assembled under the sponsorship of Sam Hummel, Joe Gawthrup, and other members of the Crescent Club. Jerry Bolling was elected president along with five other officers and three directors-at-large.

In its first two years, the Club met each Thursday at 7:00 a.m. in the basement conference room of the (former) Ramada Inn on West Market Street. The only breakfast Rotary Club in the area, Gate City quickly established its reputation as a popular make-up club. This circumstance allowed the early forging of ties to the existing Rotary Clubs and the Club was rapidly assimilated into the District leadership fold with several ongoing and new multi-club projects at both the local and international levels.

The following year, the Club moved its meeting place across the street to Greensboro College the to the Board of Realtors building off West Wendover Road. In 1994, the Club moved to the Starmount Country Club and thereafter to our current location at the O’Henry Hotel. During this formative time, Gate City established itself as a strong sibling in the local Rotary family and provided core leadership in significant local projects, including Preserve Planet Earth (which resulted in the regional planting of one million trees over a five-year period) and Neighborhoods United, where Bob Krumroy spearheaded a city-wide effort to renew an entire community in east Greensboro, an undertaking which received national attention.

After more than a decade of service, Gate City Rotary remains an active membership supporting community charities such as the Children’s Home and Camp Carefree. The Club membership willingly volunteers its time to support Greensboro Clean Sweep, Street Clean-up, Camp Carefree fix-up, annual “bell ringing” with the Salvation Army and other worthy causes.

Gate City Rotary enthusiastically embraces services to vocation, community, club and the world, in keeping with the timeless four-way test, handed down by the founders of Rotary.
​

Visit our club site at http://www.gatecityrotary.com/